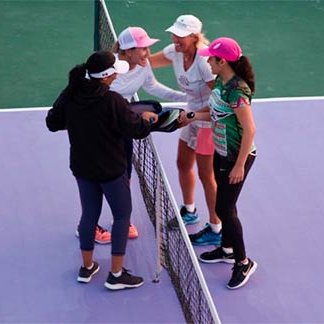 Join Network
TRRPL is a unique and fun pickleball league! Here's what makes us unique...and better:

1. Each game has a referee - a first for league play!
2. All games are a round robin with your teammates....you play with a different teammate each game. The opponents are doing the same so you have a lot of variety in each match.
3. CASH prizes for the winning teams!
4. We have three playing levels: Beginner, Intermediate or Advanced level. Beginner League doesn't allow slamming.
5. Each team selects their home court and teams will travel for half of the matches to their opponent's home court. No pickleball courts available? Use a tennis court. Watch how to convert a tennis court into a pickleball court in minutes: https://youtu.be/Qu8oL8Vdzmw

Leagues will begin in the spring of 2022.

Below are Five Sections:

1. All leagues are doubles and you play with a different teammate for each game. You’ll play four games per match.

2. Games are played on a team’s home court so the Away team will travel to play. All teams must have a home court. The same court can be the home court for multiple teams. See Section 4 to learn more about how to choose a home court.

4. Five players are needed per team, per match. Four players from each team are playing on the two courts. The two players who sit out each game serve as a referee. The referee’s sole responsibility is to make sure there are not foot faults at the kitchen line. Referees are not responsible for keeping the score or making line calls.

5. There are five rounds per match with two games played at the same time on two courts. The match should take about 90 minutes.

6. Each league is planned for eight weeks with one match per week. Those parameters might change depending on the number of teams in the league.

7. Each league is $20 per person. Payment is not collected until you join a team. Four teams must be created in a league before players can join a team.

1. Make sure you’re a member of the TRRPL Network in your region. It’s free to join.

2. Look in the right hand side of the Home page and you’ll see the Leagues for each region.

4. Start a team today! You will not be charged until you start adding players and a team can't add players until there are at least four teams in the league.


STARTING A TEAM - if you have teammates in mind:

b. Enter a Team Name

STARTING A TEAM - if you're solo but want to find teammates

b. Enter a Team Name like "Needs Players" - some name that will let others know you're looking for teammates. You can change the team name later.

j. You can have as many as 12 people on a team. You can look for players looking for a team in Comments on the League Nav Bar menu.

JOINING A TEAM if you’re a single:

You have two options.
a. You can contact the team captain of current teams to see if you can join their team.
b. Under the League you are interested in, there is a Comments link on the Nav Bar. Post a comment that you're interested in joining a team. Include a USAPA ranking if you have one.

Players generally use their USAPA ranking….2.0, 2.5, 3.0, etc. to determine what level to play. If they don’t have a USAPA ranking, they can self-rate and choose what league they want to play in. It’s best if one asks someone knowledgeable to suggest what league is best for you.

The following levels are based on USAPA ratings:

The Beginner level restricts slamming the ball. If you’re a slammer / banger, choose to play at the Intermediate level.

The winners of each league will a cash prize of $20 per person. To be eligible for the cash prize, a player must play in at least 50% of the matches. So, theoretically, if you had 10 people on a team and five played in half of the games and the other five played the other half, 10 players could win money.

Even if you don't win a league, you still have a chance to win $10,000 each week! TravelersMeet.net, our network sponsor, is having a drawing each week for $10,000 and it's free to enter. Just visit TravelersMeet.net.

Network Events
Tue
25
Wed
26
Thu
27
Fri
28
Sat
29
Sun
30
Mon
31
There are no events this week, or in the future.
Where is everyone playing pickleball? Use an event to organize play sessions for a group of players. Players can rsvp for an event, and the system takes care of the rest. Learn more.

Go to Palm Desert, California to view events for the entire area, and not just this network.

Using this tool, you can attract a group of players to meet at a court to play some pickleball. Here's how it works:

1). Click the "+ Add" button above the calendar.
2). Select the court, date and time.
3). Select the playing levels you are looking for.
4). Select the minimum number of players you need to play.
5). Determine who to invite. (nearby players, network members, connections, etc..)

And that's it! Players can now join your event. You can also add, or even invite players.

Once the minimum number of players have joined, everyone will get an email letting them know it's on!

You will be able to see all the players who have joined, and even post comments. 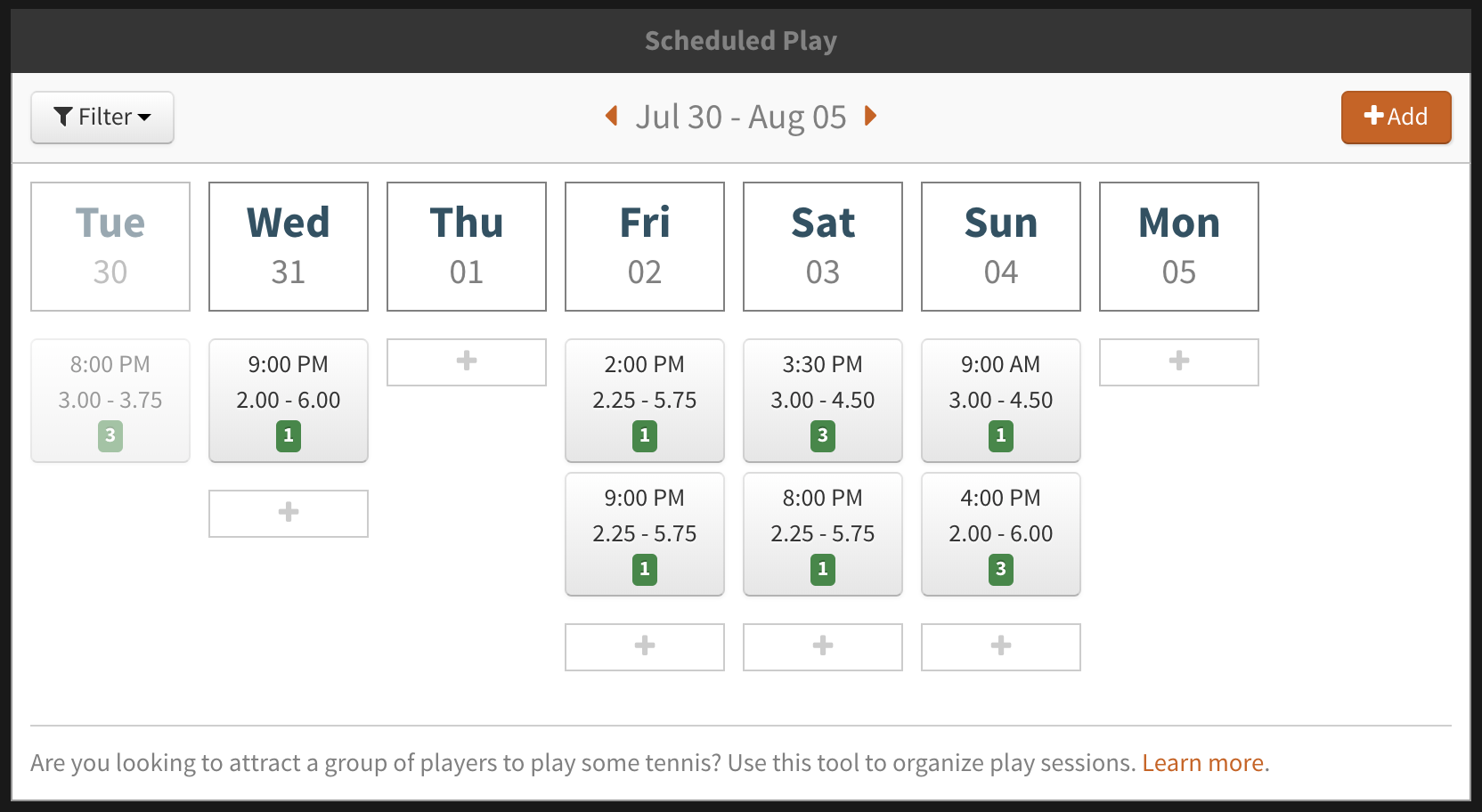 When logged in, you can view all events near you by clicking the event icon at the top right of every page:

For easy access, you will see all your events in your "My Links" drop down: 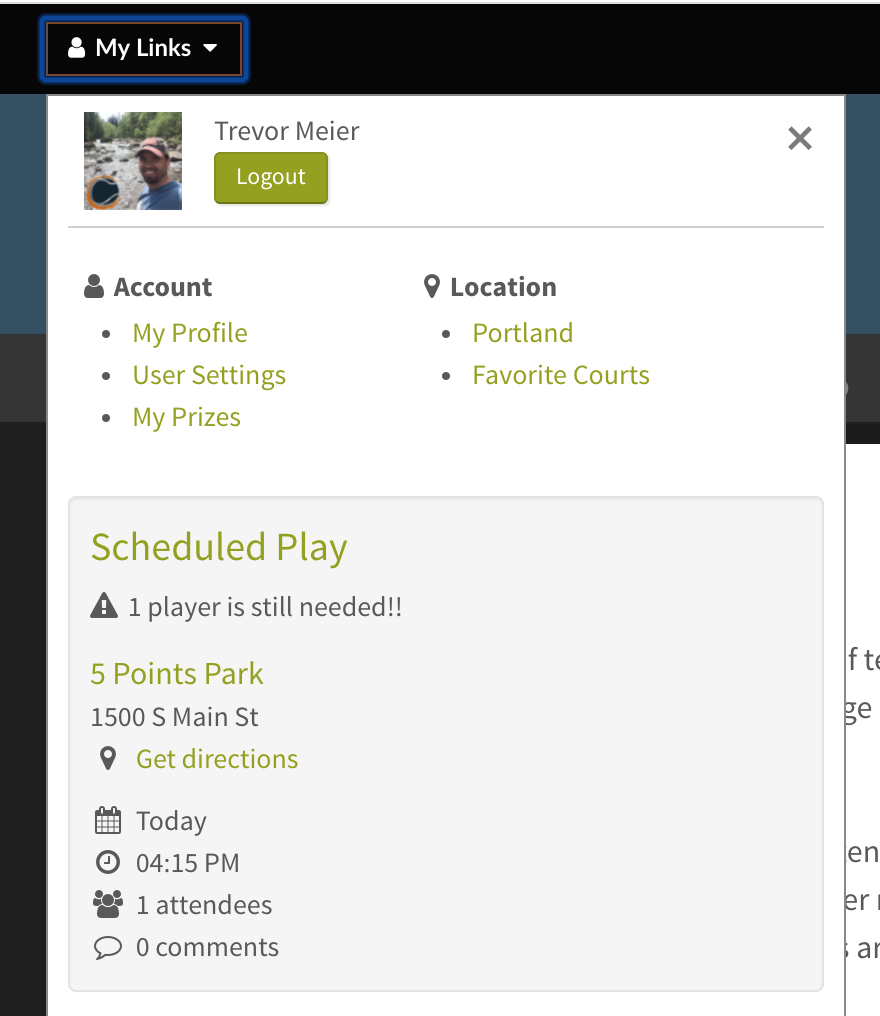 Log in or register to post a comment.
Go to Palm Desert, California to view comments, partner searches, and check-ins for the entire area, and not just for this network.
Chat for network members. All members will be notified when a comment is made.